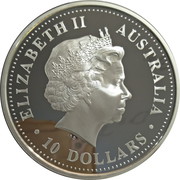 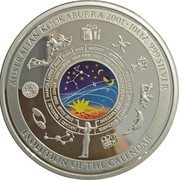 Expansion of the frontiers of human knowledge

Stylized representation of the solar system and stars in the centre. Astrological star signs .

The 'Evolution' Companion Series of Proof Kookaburra coins released by the Perth Mint celebrates the expansion of the frontiers of human knowledge. as we begin the 21st century, it is an appropiate time to commemmorate the tools we have developed to understand our world.

This five-year series will feature a special design on each year's 10oz proof coin based on the theme of 'Evolution'. The first design is the 'Evolution of the Calendar'. The Gregorian calendar used throughout most of the world today, has evolved from increasingly accurate methods of measuring the movements of the Earth and Moon as they orbit the Sun. for the first time in the Australian Kookaburra proof series, colour has been used to highlight the central design area, which features an image of the solar system, the key element to the development of all calendar systems.

Bullion value: 234.77 USD Search tips
This value is given for information purpose only. It is based on a price of silver at 829 USD/kg. Numista does not buy or sell coins or metal.