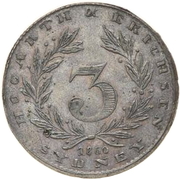 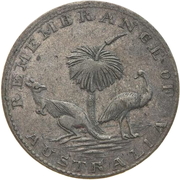 Within olive wreath the numeral 3; below wreath, 1860; around above, HOGARTH & ERICHSEN below, SYDNEY

Kangaroo to left and emu to right of a grass tree; around, REMEMBRANCE OF AUSTRALIA

"Hogarth, Erichsen & Co. were jewelers in Sydney and confined their energies to the issue of large numbers of threepences bearing their name. There were no less than eight varieties, often in very inferior metal. Indeed, so poor was the quality that it is said that they were withdrawn under Government pressure. Erichsen is credited with being the actual maker, and also with having the habit of striking a few whenever he felt in need of refreshment. Hogarth was also a practical die-sinker, and for years after the firm was dissolved, worked largely for Stokes, in Melbourne, though never in his workshop." Andrews, Arthur Dr., Australasian Tokens and Coins, Mitchell Library, Sydney, 1921 p. 16.

"The Hogarth, Erichsen pieces are of a later date, and generally of inferior metal. They were mostly struck at Leichhardt in a press owned by Mr. Thornthwaite, who knew both Hogarth and Erichsen intimately... He (Hogarth) may have prepared the die for this piece (the Aboriginal 4d And. 692) and possibly others, though Erichsen is generally credited with the making of the dies." Andrews, Arthur Dr., Australasian Tokens and Coins, Mitchell Library, Sydney, 1921 p. 112.
[Book] Andrews, Arthur. 1921. Australasian Tokens and Coins.
[Book] Heyde, Gilbert C. & Skinner, Dion H. 1967. Unofficial Coins of Colonial Australia and New Zealand.