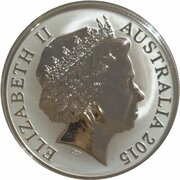 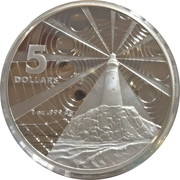 Radiating beams of light from a lighthouse situated on a rocky crag with waves at bottom. Denomination and purity.

On 1 July 1915, the Commonwealth of Australia officially accepted responsibility from the state governments for all landfall and coastal lights including 167 lighthouses surrounding Australia's coastline. Today there are some 388 aids to navigation sites controlled by the Australian Maritime Safety Authority.