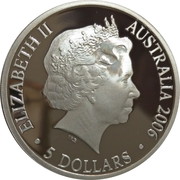 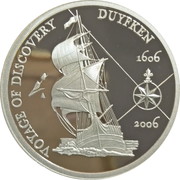 Features the Duyfken ("Little Dove") ship which captain William Janzoon sailed when he discovered the Australian coast. In conjunction with the Royal Dutch Mint, the Royal Australian Mint has placed the Dutch mintmastersign (course setting sail) and a special sign in the form of a tulip on the coin to the left of the main sails. A compass rose to the right.

This coin was released in a wooden case accompanied by a Royal Dutch Mint 5 Euro silver coin also marking this occasion. 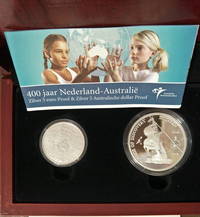 Bullion value: 33.74 USD Search tips
This value is given for information purpose only. It is based on a price of silver at 910 USD/kg. Numista does not buy or sell coins or metal.