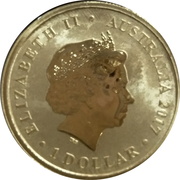 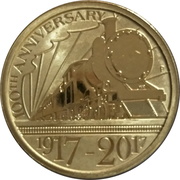 Steam train heading right over a representation of railway tracks and sleepers.

This coin issued by the Perth Mint.

This postal numismatic cover includes two official Australia Post $1 stamps featuring iconic advertising posters from 1930 and 1960. The first shows a figure on a camel viewing a G-class locomotive as it speeds across the desert towards Perth, and the second displays the first diesel locomotive GM1, in service between 1951 and 1967.
The stamps are postmarked for the first day of issue and the envelope includes Australia Post’s Seal of Authenticity.
Each coin is housed in an illustrated card and presented in an envelope featuring photographic images of the railway.