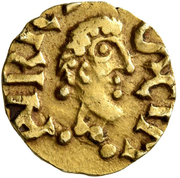 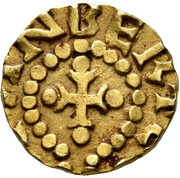 Cross pattée ending in four jewels, within stylized wreath with ties at the bottom.

St. Maurice-d'Agaume was an important early Christian pilgrimage devoted to the worship of Saint Maurice, the leader of the legendary Theban Legion, which according to Christian traditions was altogether executed in 303 by the pagan emperor Maximian (286-305) after refusing to fight against fellow Christians in Burgundy. The relics of Saint Maurice and his soldiers were allegedly found by Theodore of Octodurum in the late 4th century on the site of Agaunum (or Acaunum), a Roman fort guarding the entrance to the Valais (lat. Vallis Poenina), at a narrow section of the valley. More than a century later, on 22 September 515, the chapel built by Theodore was converted into a monastery by Sigismund, the crown prince of the Kingdom of Burgundy, and it is here where Sigismund, now King, was buried after his downfall in 523/4. The Abbey of St. Maurice became famous across Europe for its continual prayer (laus perennis), a perpetual hymn of praise sang by alternating groups of monks day and night between 522 and the early 9th century. Although it suffered heavy damage from a Langobardic raid in 575 and later from several rock fall events, it still exists today and is regarded as the oldest continuously populated monastery of Europe.

The Merovingian coinage struck at St. Maurice-d'Agaume is of the highest rarity, with Depeyrot recording thirty-six examples in total, of which only five are clerical and name the eponym Saint Maurice. This tremissis was struck from the same dies as the example published by F. Soret: Lettre aux membres de la Soc. d'hist. et archéol. sur les enfouissements monétaires de Genève, 1 (1841), 245, note 2, found in the Canton Geneva in 1841 but misdescribed as reading 'MINOCIVS' on the reverse ever since. The reading can now be corrected to BERE-MIN, a short form of Bertemindo or Bertemindus. (source: Leu Numismatik AG Auction Catalog)

» Buy coins from the Merovingian mint of Acaunum