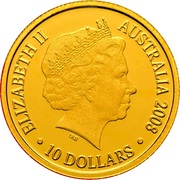 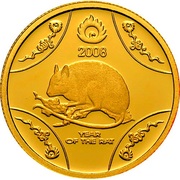 Rat with authentic Chinese symbols all in a symmetrical design. No Chinese character

In 2007 the RAM launched an on-going series of Fine Gold (.999) NCLT Proof ten dollar coins depicting each Lunar year and their representative animals. This second coin in the series was issued in a capsule in a wooden box.

Bullion value: 184.58 USD Search tips
This value is given for information purpose only. It is based on a price of gold at 58 882 USD/kg. Numista does not buy or sell coins or metal.