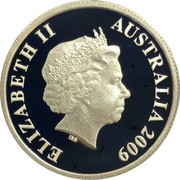 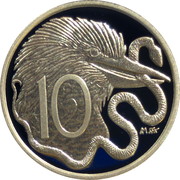 The design denoted the strong facial character of a kookaburra, Australia's best loved bush bird with a snake caught in its beak.

The 1966 Australian Decimal Pattern Proof Set honours the five reverse designs proposed by Andor Mészáros for Australia's new decimal coins in 1966. The set comprises five decimal-sized coins struck by the Perth Mint. Their reverses are produced using the artist's original coin plasters, released to the Perth Mint for this purpose by the Mészáros family. 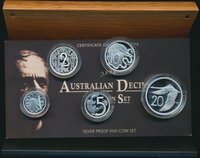 Bullion value: 5.35 USD Search tips
This value is given for information purpose only. It is based on a price of silver at 883 USD/kg. Numista does not buy or sell coins or metal.