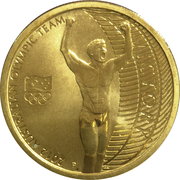 Features a representation of an Olympian in a triumphant pose with arms raised against the word VICTORY. The design includes the Official Team Logo and the inscription 2012 AUSTRALIAN OLYMPIC TEAM. 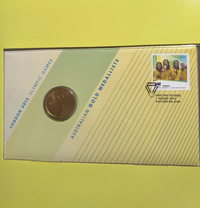 The coin was also issued in a 5 coin folder containing each different coin in the Olympic series.