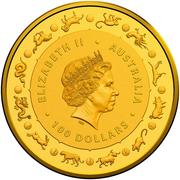 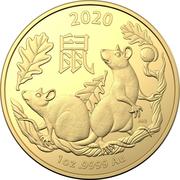 Two Rats on an oak branch

In Commemoration of the 2020 Chinese New Year, the Royal Australian Mint presents the Year of the Rat gold investment series, exclusively distributed by PAMP.

In 2020 we celebrate the Year of the Rat, traditionally the first sign of the Chinese Lunar calendar. The rat is celebrated by the Chinese for its symbolic properties of intelligence, adaptability, charm, good health and prosperity. This series is uniquely suited for both gift-givers and investment enthusiasts alike.

All Australian legal tender coins have been designed and struck in high detail and quality by the Royal Australian Mint.

Bullion value: 1,734.42 USD Search tips
This value is given for information purpose only. It is based on a price of gold at 55,775 USD/kg. Numista does not buy or sell coins or metal.