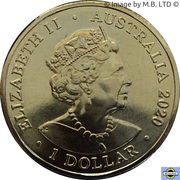 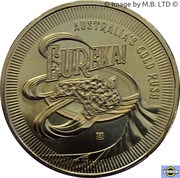 A gold nugget in the shape of Australia set inside a stylised swirl reminiscent of a sand dune.

This NCLT coin which commemorates Australia's Gold Rush Era was issued by the RAM in the "Four Coin "C" mintmark & [B], [S], [M] Privymark" set for 2020. (Image of the coin on this page is the "B" Brisbane Privymarked version) 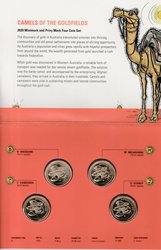 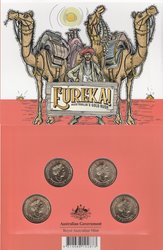 The Australian gold rushes led to the development of modern Australia, but life on the goldfields could be harsh. The remote desert landscapes of Western Australia needed supplies, and camels were ideal for the job. Camels were imported into Australia by ‘Afghan’ cameleers, and were crucial to WA’s gold industry. We honour the hardy camels and their enterprising cameleers with this 2020 mintmark and privy mark four coin set.

The same coin is available from the Visitor Press on the ground floor of the RAM in Canberra with "C" mintmark for $3.00. The coin is issued with five different coin folders. 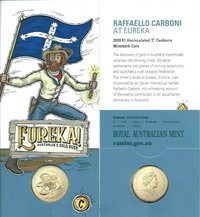 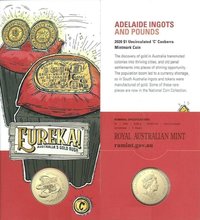 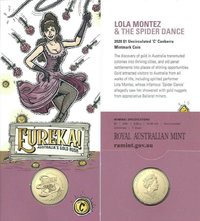 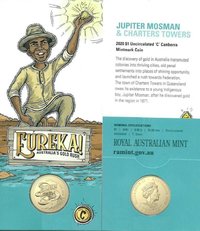 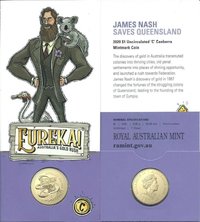 So far in 2020 a coin has been issued in a coincard with a (P) Counterstamp via the RAM Portable Press at the ANDA Money Expo Event in Perth.

It was planned that (B), (M), (S) & (MAP) Counterstamps were to be issued at various RAM Pop Up Shop or ANDA Events in Coincards, However Covid-19 has prevented that from happening as planned so far. If they are eventually issued they will be added to the mintage lines as they are released.