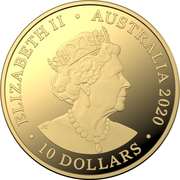 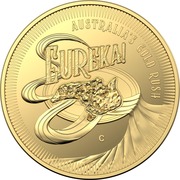 A gold nugget in the shape of Australia set inside a stylised swirl reminiscent of a sand dune.

This Fine gold (.999) $10 coin was released by the RAM to commemorate Australia's Gold Rush Era. It was issued in a capsule in a plush case with certificate of authenticity.

The Australian gold rushes led to the development of modern Australia, but life on the goldfields could be harsh. The remote desert landscapes of Western Australia needed supplies, and camels were ideal for the job. Camels were imported into Australia by ‘Afghan’ cameleers, and were crucial to WA’s gold industry. We honour the hardy camels and their enterprising cameleers with this 2020 BU Gold Coin.

Bullion value: 164.33 USD Search tips
This value is given for information purpose only. It is based on a price of gold at 52,844 USD/kg. Numista does not buy or sell coins or metal.