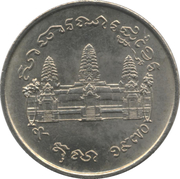 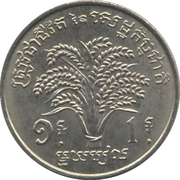 Translation:
It is the life of the national economy
One Riel

However, this coin was released in limited numbers in 1983. and this came into circulation.

Note: According to Standard catlog of  world coins - This coin was minted at the Llantrissant Branch Mint in 1972 but dated 1969. According to the FAO, the coin was to have been dated 1971. The photograph of the coin, supplied by the FAO, is dated 1970. Only This type of coin is currently available.