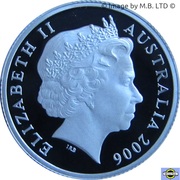 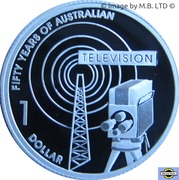 Television transmission tower with transmission waves emanating from it. An old style box TV camera on a tripod

This Fine Silver (.999) Proof NCLT commemorative one dollar coin was released by the Royal Australian Mint to commemorate 50 years of Australian TV.  On September 16 1956 Bruce Gyngell first appeared on Australian TV making media history uttering those now famous words "Good evening ladies and gentlemen, Welcome to Television". NSW and Victoria were the first states to watch TV, just in time for the broadcast of the 1956 Melbourne Olympic Games with the other states following on. Of course this was black and white TV as colour didn't appear until March 1975. The non-mintmarked silver coin was released in a plush orange box with numbered certificate. The ANDA Show release version with the (A) Counterstamp was released in a plush dark blue box. (Brisbane & Canberra were square, Sydney was a long rectangular box)

Aluminium-bronze versions of the coin were released in a folding coincard with (C), (B), (M), (S) & (TV) Counterstamps at various ANDA & Royal Shows and the Public Gallery Press at the RAM during the year.

A member of this site wants to exchange this coin: brismike

Bullion value: 6.53 USD Search tips
This value is given for information purpose only. It is based on a price of silver at 561 USD/kg. Numista does not buy or sell coins or metal.