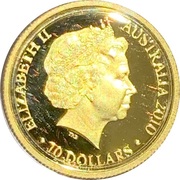 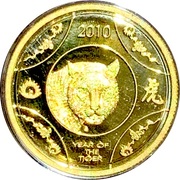 Lunar tiger bordered by traditional designs, depicted as authentic Chinese symbols in a symmetrical design. Chinese character for Tiger is to the right.

The fourth coin in this Lunar series, released by the Royal Australian Mint. Struck in 1/10oz 99.99 fine gold and minted as a proof coin, the coin is issued as legal tender under the Australian Currency Act 1965. Worldwide mintage is limited to 2,500. Each coin is encapsulated and presented in a wooden two-piece presentation case held closed by magnets. A numbered Certificate of Authenticity is included. 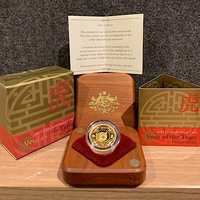 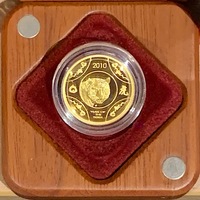 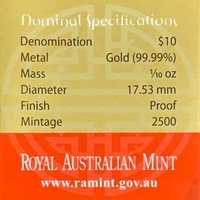 Bullion value: 19.73 USD Search tips
This value is given for information purpose only. It is based on a price of gold at 63,426 USD/kg. Numista does not buy or sell coins or metal.