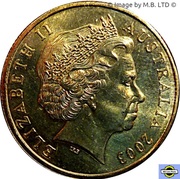 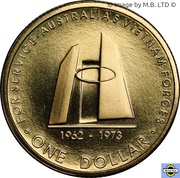 Two obelisk's with an ellipse between them.

This 2003 Vietnam Veterans NCLT $1 coin was released in a collector folder to commemorate Australia's 10 year involvement in the Vietnam war. 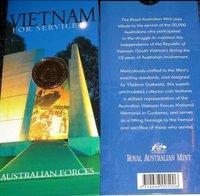 Australians became involved in the war in 1962. Over the next 10 years more than 50,000 Australians served in the theatre, peaking at more than 8,000 in country in 1967. The three services were involved in the conflict, the Army, the RAAF,  and the Navy. Australia withdrew it's forces in 1972 with South Vietnam being over-run by the forces of North Vietnam in 1975. Sadly, Australia suffered 519 fatalities in the Vietnam war and nearly 2,400 were wounded in the conflict. The reverse of the coin depicts the Australia Vietnam Forces Memorial which can be seen on ANZAC Parade in front of the Australian War Memorial in Canberra.