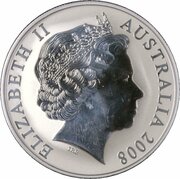 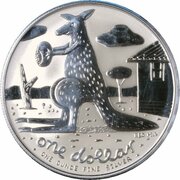 Released by the RAM in 2008 is this Fine Silver Uncirculated coin. It was designed by Reg Mombassa a famous Australian Artist who specialised in abstract design. It was issued in a coincard. 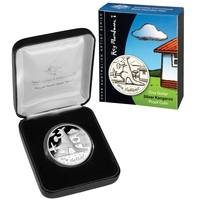 The coin was issued with a 2008 date in a number of other ways.

As a $1 Reverse Frosted Uncirculated Copper-nickel coin in a coincard.
As a $1 Fine Silver Gilded Proof 1 ounce coin in a plush case.
As a $10 Fine Gold Proof 1/10 ounce coin in a wooden case.