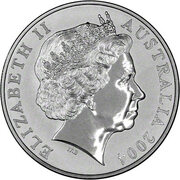 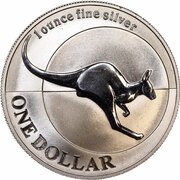 A Kangaroo silhouetted against the horizon and orb of the sun.

Coin was released in 2004 by the RAM in three versions. Uncirculated Reverse Frosted, Proof and Partially Gold Plated.

This is the Gilded version. 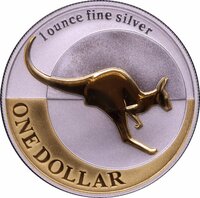 A member of this site wants to exchange it: tmu

Bullion value: 28.32 USD Search tips
This value is given for information purpose only. It is based on a price of silver at 912 USD/kg. Numista does not buy or sell coins or metal.