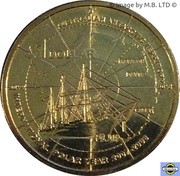 Depiction of a map of the Antarctic with converging latitude lines and marked with the locations of important Antarctic bases such as Mawson, Davis, and Casey. Overlaying all of this is the image of a 19th century sail powered ice supply ship

The RAM released this NCLT $1 coin in a coincard to celebrate the International Polar Year which ran from March 2007 to March 2009. This was a multi national scientific program that focused on the Arctic and Antarctic. This was the fourth IPY event of the last 150 years and it had particular areas of interest in how polar ice was changing, what impact changes in the polar regions will have globally, how the 4 million people that live in or close to the Arctic regions will be affected, and what can be learned about the planets history from ice records.