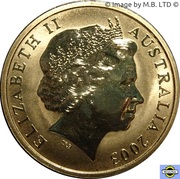 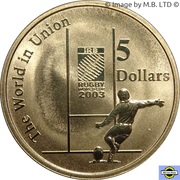 Depiction of a Rugby Union player leaning back about to kick a rugby football in an attempt at conversion. In the distance are some Rugby Football Posts. Between the posts is a stylised Rugby Ball logo set in a rectangle.

This Aluminium-bronze NCLT coin was issued by the RAM to commemorate the hosting of the Rugby World Cup by Australia in 2003. It was issued in a large square folding coincard inside a large square slipcase.
Front of Slipcard 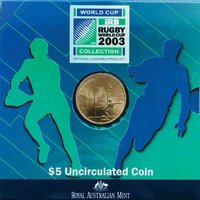 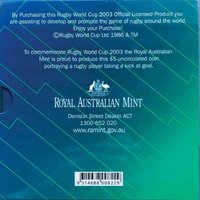 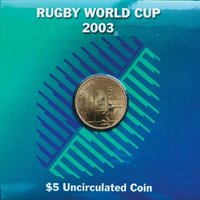 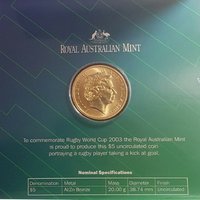 It was at the 1985 meeting that the International Rugby board (IRB) approved for the inaugural Rugby World Cup to be jointly staged in Australia and New Zealand in 1987. Subsequent Tournaments have been held every four years. The UK & France in 1991, South Africa in 1995, Wales in 1999. Australia was the sole host in 2003 with the final being played at the Telstra Stadium in Sydney.