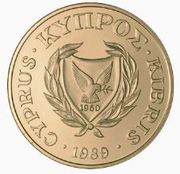 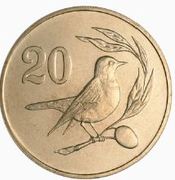 Cyprus coat of arms (A dove holding an olive twig and the independence year 1960), laurel twigs around and the country name (Cyprus) in Greek, Turkish and English

Shows a Pied Wheatear, the characteristic bird of Cyprus, perched on an olive branch. The Cyprus Pied Wheatear (Oenanthe cypriaca) nest only on Cyprus, migrating from NE Africa and Near East and the numerical value to the left

There were two official bank sets for this coin
Set of the first cent coins of the Republic of Cyprus in brilliant uncirculated (BU) condition, 1983 issue, in a brochure.

Set of the first cent coins of the Republic of Cyprus, 1983 issue, in proof condition in a rigid plastic case. 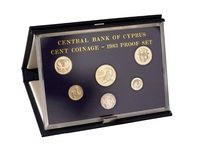