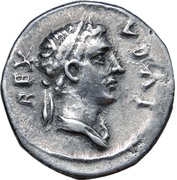 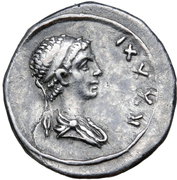 Diademed and draped bust of Ptolemy right, R XXXI before.

The Banasa Hoard, deposited in circa AD 18-17 was found in 1907 near modern day Souk-el Arbaa, 120 km northeast of Rabat, Morocco, in 1907. The hoard was previously said to be from Alkazar (El Ksar El Kebir), 70 km south of Tangier and hence is occasionally referred to as the El Ksar Hoard. The group contained approximately 4000 silver coins and one bronze. A substantial number of the coins now reside in public collections, principally in London, Paris, Berlin, Athens, New York and Algiers.