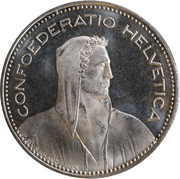 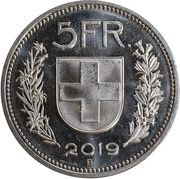 The Swiss escutcheon with flower wreaths and the face value, date and mintmark if present at bottom.

Translation: The Lord Will Provide 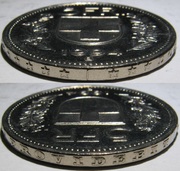 In 1967, the price of silver soared steeply, reaching 260 francs per kilogram in August and 350 francs per kilogram in March 1968.  At this time, the melt value of the 1⁄2, 1, and 2 franc pieces was circa 46% higher than their nominal value. Nevertheless, the nominal value of the 5 franc coin continued to stay slightly above its melt value of 4.38 francs. Switzerland started to experience a severe shortage of cash, due to the 1⁄2, 1, and 2 franc pieces being illegally melted. To a certain extend, the number of 5 franc pieces in circulation also dropped, due to hoarding.