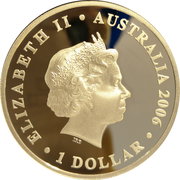 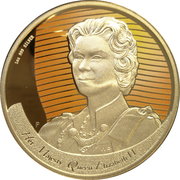 Image of Her Majesty Queen Elizabeth II as she appears on the one dollar note.

Her Majesty Queen Elizabeth II, Australia's Sovereign who ascended to the throne 54 years ago in 1952 on the news of the death of her father King George VI.  Admired and respected worldwide for her devotion to duty and her stabilising influence, she is the world's most travelled Head of State and currently the fourth longest serving British monarch in history (in 2006). The Queen, who celebrates her 80th birthday in 2006, has visited Australia on 14  occasions . Australia's first one dollar note featured the image of Her Majesty on the front.

Bullion value: 18.50 USD Search tips
This value is given for information purpose only. It is based on a price of silver at 595 USD/kg. Numista does not buy or sell coins or metal.