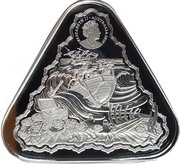 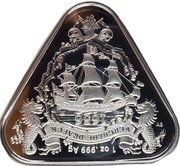 6th portrait of Her Majesty Queen Elizabeth II facing right wearing the King George IV State Diadem and the Victorian Coronation Necklace set within a small circle at the top of the triangle. Below an image of the shipwreck and sailors attempting to flee on a lifeboat. Below that a chest full of coins with some spilling out

Jody Clark is a British engraver employed by the Royal Mint, notable for designing the fifth and latest portrait of Queen Elizabeth II to feature on coins of the pound sterling.
Adam Ball is a designer with the Royal Australian mint.

In 1656 a ship named Vergulde Draeck was traveling towards Batavia (current-day Jakarta), and struck an uncharted reef off the coast of Western Australia. The ship was carrying trade goods, coins, cargo, passengers and crew. Abraham Leeman, the under steersman, took the boat and six crew on a journey to Batavia to report the wreck. It is said that there were more survivors, but they were not located and it is unknown what happened to them. The wreckage of the Vergulde Draeck was discovered in 1963, and was excavated in 1972. About 19,000 coins were discovered, mostly Spanish reals and Japanese Silver coins.

The mystery of what became of the survivors of the Vergulde Draeck has never been answered. This was one of the most enigmatic episodes of Australia’s maritime history

Bullion value: 25.21 USD Search tips
This value is given for information purpose only. It is based on a price of silver at 812 USD/kg. Numista does not buy or sell coins or metal.