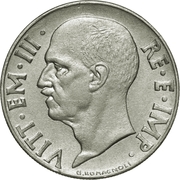 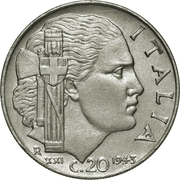 Head of a woman facing right (representing Italy) behind a fasces placed at left, in front of her hairs, and adorned with the Savoy shield and with an axe at its left. Value below between the date at right and the mintmark plus the year of Fascist Era on the left.

Coins in pure acmonital are magnetic and more brilliant and darker that coins km# 76a, that have also a part of Nickel
A part of 1943 coins were minted in Aosta but with the "R" mintmark, so are totally indistinguishable by those minted in Rome.