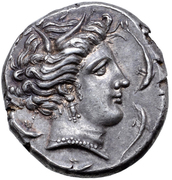 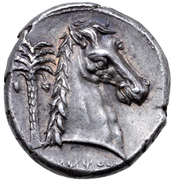 Translation: People of the Camp

The Siculo-Punic tetradrachms were issued for financing of Carthaginian military campaigns in Sicily. From the late fifth century BC, the coins combined traditional Carthaginian and Greek Sicilian city states designs. The styles of these coins varied considerably from those bearing a distinctly 'Punic' appearance, to those that were very fair emulations of the work of Syracusan masters.