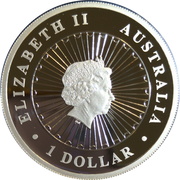 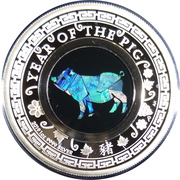 Incorporates an inner panel of a pig detailed in pure Australian opal. The outer panel of the coin depicts a collection of stylised flowers, grapes and other foliage . The design includes the inscription YEAR OF THE PIG , the 2019 year date and the Perth Mint's traditional 'P' mintmark.