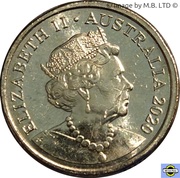 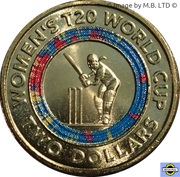 Released on 19/2/2020 by the RAM via major Supermarket chain Woolworths is this circulating coloured $2 coin. It is commemorating the participation of 10 national teams in the Womens T20 Cricket World Cup to be held in Australia.

The ICC Women's T20 World Cup is the biennial international championship for women's Twenty20 International cricket. The event is organised by the sport's governing body, the International Cricket Council, with the first edition held in England in 2009.

The coin is being placed into circulation at face value via change given at Woolworths supermarket checkouts, mintage unknown and not yet announced by the RAM. It is also available in UNC condition for $3 in a coincard at the supermarket service desk.