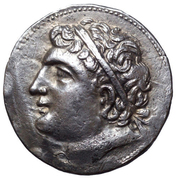 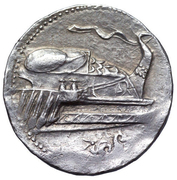 Prow of galley to right, with rostra, oars, two shields on deck and a wreathed forepost, to which is attached a pennant; seahorse in exergue.

The obverse of this coinage is popularly believed to depict Hamilcar Barca (or depict his features assimilated into Herakles-Melqart), who had after 247 commanded Carthage's fleet and army in the Sicilian theatre of the First Punic War. The reverse of this type clearly alludes to the Carthaginian tradition of being a primarily naval power, and probably more specifically, to a renewed strengthening of the fleet, which had been so devasatated in the war - according to Polybius' estimates, Carthage had lost 500 ships and he commented that the war was, at the time, the most destructive in terms of casualties in the history of warfare, including the battles of Alexander the Great.