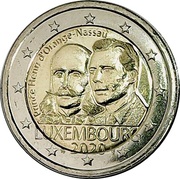 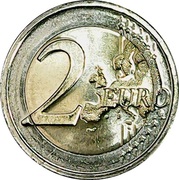 The 200th anniversary of the birth of Prince Henri

The design shows on the right hand the effigy of His Royal Highness, the Grand Duke Henri,
and on the left hand the effigy of Prince Henri. At the bottom is the name of the issuing country ‘LUXEMBOURG’ and the
year-date ‘2020’. At the left, in semi-circle form, is the inscription ‘Prince Henri d’Orange-Nassau’ and underneath his effigy
is the inscription ‘1820 – 1879’.
The coin’s outer ring depicts the 12 stars of the European flag.

Reeded with inscription: the number "2" and two stars

» Buy coins from Luxembourg at eBay