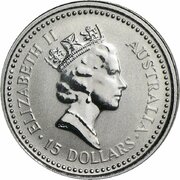 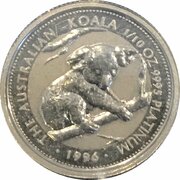 A koala perched on a gum tree branch.

Issued as a Proof coin in a 5 Coin set in 1995 & Individually
Issued individually as a UNC Bullion coin in 1996.

Bullion value: 120.99 USD Search tips
This value is given for information purpose only. It is based on a price of platinum at 38,886 USD/kg. Numista does not buy or sell coins or metal.