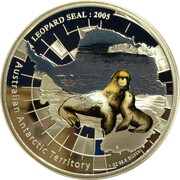 Coloured image of a Leopard Seal (Hydrurgo leptonyx) and its pup, which occur exclusively in the Southern Hemisphere, generally inhabiting pack ice surrounding the Antarctic continent. These solitary, predatory animals with spotted body markings also frequent larger sub-Antarctic islands, including Australia's Heard and Macquarie Islands, and have even been sighted in Tasmania.

As part of the Australian Antarctic Division's scientific program, researchers are studying the abundance and movements of Leopard and other pack-ice seals to help monitor changes that occur in the region in response to global warming.

Bullion value: 27.09 USD Search tips
This value is given for information purpose only. It is based on a price of silver at 871 USD/kg. Numista does not buy or sell coins or metal.