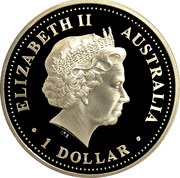 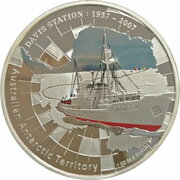 The design is symbolic of the site of Davis Station on the coast of the ice-free Vestfold Hills. The coloured image, which appears within the outline of Antarctica, also portrays the Kista Dan, a ship with a welded ice breaker hull that was instrumental in the establishment of Davis and Mawson Stations. The design incorporates the inscriptions 'DAVIS STATION : 1957 - 2007' , 'Australian Antarctic Territory', and the Mint's traditional P mintmark.

The establishment 50 years ago of Davis Station, named in honour of Captain John King Davis (1884 - 1967),  a successful Antarctic navigator and the Master of ships used on expeditions led by both Ernest Shackleton and Douglas Mawson. The most southerly Australian Antarctic Station, situated 2,250 nautical miles south-south west of Perth, is a valuable staging base for scientific activity in the region, with the capacity to support a large population of scientists during the summer season.