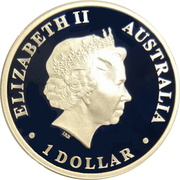 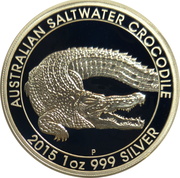 A saltwater crocodile with its jaws open, exposing its sharp teeth. The design includes the words ”AUSTRALIAN SALTWATER CROCODILE” , the mint's traditional “P”mint mark and the 2015 year date.

The Australian Saltwater Crocodile is the largest reptile in the world in terms of body mass, and is found in suitable habitats from northern Australia through Southeast Asia to the eastern coast of India. Their sheer enormity makes them the most dangerous of all crocodiles to humans.