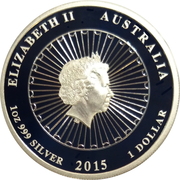 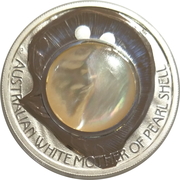 The reverse of the coin features a sculpted representation of an Australian white mother of pearl shell with a polished fragment of mother-of-pearl centrepiece, against a rippled pattern representing the ocean floor. The inscription AUSTRALIAN WHITE MOTHER OF PEARL SHELL and The Perth Mint’s ‘P’ mintmark also appear in the design.

Mother of pearl is a hard, smooth, shining iridescent substance that forms the inner layer of the shells of certain molluscs, such as the oyster and abalone. It displays a mix of colours, ranging from deep cobalt blue and peacock green, to hues of purple, cream and pink. Also known as nacre, it is highly sought after as decorative pieces and used in the manufacture of jewellery, buttons, cutlery, guns, inlays in furniture, and musical instruments.