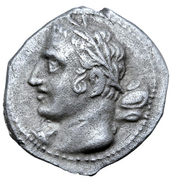 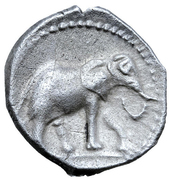 This coin was minted by the Punic general Hasdrubal the Fair in 229/228 BC, immediately after the foundation of the city. In contrast to the coinage attributed to Hamilcar, this type makes no reference to the traditional naval power of Carthage, instead adopting the African elephant as the reverse type. Evidently not a war-elephant (note the absence of either a mahout or a fighting tower) it is perhaps best interpreted as a symbol of Carthage or Barcid power in general. Indeed it is known that Hasdrubal favoured diplomacy and the demanding of hostages to further expand his influence in Spain; the club-wielding Herakles-Melqart implies the threat of force rather than its open display.

Though Robinson (Essays Mattingly) interpreted the beardless head of Melqart on this coin as bearing the features of Hannibal Barca, the dating of the issue (as per Villaronga, MHC) suggests it is more likely to be Hasdrubal, if indeed an individual commander's likeness is shown.