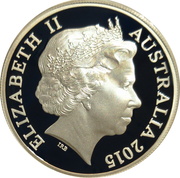 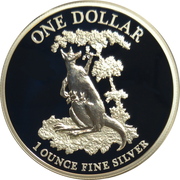 A kangaroo with two joeys in front of a tree. Based on a hand coloured engraving by V. Woodthorpe.

In George Barrington's book A Voyage to Australia the kangaroo is described as 'about the size of a common deer, of a dark tan colour...its hind legs are  much larger that the fore, and with them they leap and spring forward with amazing rapidity'.