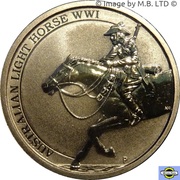 A soldier of the Australian Light Horse charging on his horse. The design includes the inscription AUSTRALIAN LIGHT HORSE WWI, as well as The Perth Mint’s traditional ‘P’ mintmark.

Struck by the Perth Mint but issued exclusively by Australia Post in PNC Issue 12 of 2017.

Five brigades of the legendary Australian Light Horse served during the Great War, mainly in the desert campaigns. Following Gallipoli and troops departing for the Western Front, the ANZAC Mounted Division was formed in Egypt in 1916, comprising three Australian Light Horse brigades, the New Zealand Mounted Rifles and the Imperial Camel Corps.
In 1916 and early 1917 they secured the Suez Canal and fought at Romani in the Sinai Desert. In 1917 they participated in the advance into Palestine, where they fought actions at Gaza, Beersheba and Jerusalem. In 1918, they moved into the Jordan Valley, where they fought at Jericho, Amman and Es Salt, and ultimately entered Damascus later in the year. Conditions cold be no more different to those experience in Europe, in place of bone-chilling cold and lakes of mud, mounted troops endured extreme heat, water shortages and seas of sand.