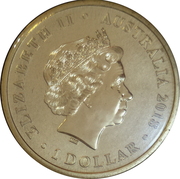 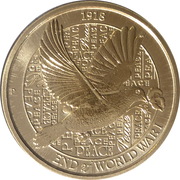 The coin’s reverse portrays a dove which has for millennia symbolised peace. The bird is carrying a poppy, another poignant symbol in its beak. Red poppies were the first flowers to bloom in the devastated battlefields of Western Europe and soon became universally associated with the act of remembrance.

Struck by the Perth Mint but issued exclusively by Australia Post in PNC Issue 23 of 2018.

Australian troops entered their last major action on the Western Front at Montbrehain on 5 October 1918. Weeks later, on 11 November, Germany agreed to the allies' terms and signed the Armistice of Compiegne, silencing the guns on the Western Front from 11am Paris time. Peace had already come to the Middle East, with Turkey signing an armistice on 30 October.
When news of peace broke in Australia, scenes of jubilation played out in the streets of may towns and cities. Troops on the frontline would no doubt have felt great relief but their mood was more muted; devastation was all around them and the bodies of fallen cobbers would be left behind. The war's end was formalised with the Treaty of Versailles, signed in June 1919.