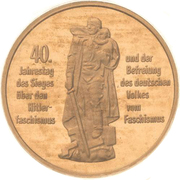 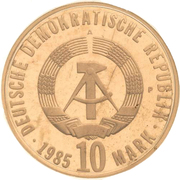 Coat of arms of the German Democratic Republic, legend, date and value surrounding.

Statue of a soldier with child and broken swastika (at the Soviet Memorial in Treptower Park in Berlin), dividing lettering.

Translation:
40th anniversary of the victory over Hitler fascism
and the liberation of the German people from fascism.

The Treptower Park Soviet Memorial is a monument and military cemetery located in Treptow Parker in Berlin, Germany. This memorial is dedicated to all Red Army fighters who fell in the Second World War.

A total of 200 specimens were made from these samples. The planchets for this came from Switzerland, which were made available in several deliveries. Depending on the delivery, the proportion of gold fluctuated. There are thus samples in white, red and yellow gold. According to Jaeger, 66 copies were made in red gold and 200 copies in white gold (see Jaeger p. 747). In the official certificate, the total number of copies of 200 copies is given, without going into the different gold alloys