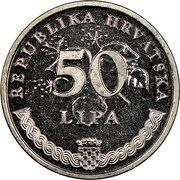 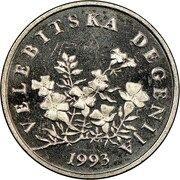 A stylized linden branch in inflorescence in the background of the value, the country name above around the rim, and the arms of Croatia at the bottom with old Croatian braided ornaments on both sides.

The Velebit degenia in inflorescence in the centre with its name in Croatian along the edge, the date at the bottom, and the engraver's initials on a flower.