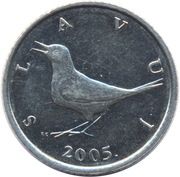 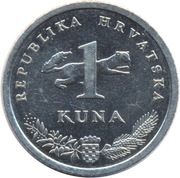 In the upper half-circle is a marten running to the right and the value in numerals in front of its body and the word "KUNA" written underneath. Along the edge upper rim is written issuers name in Croatian and the Croatian coat of arms in the middle of the lower edge in between stylized wheat ears to the right a stylized olive branch with fruits to the left