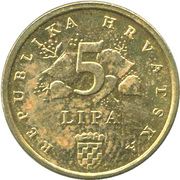 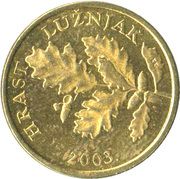 A stylized linden branch in inflorescence in the background of the value, the country name above around the rim, and the arms of Croatia at the bottom.

A branch of red oak in the centre with its name in Croatian along the edge, the date at the bottom, and the engraver's initials on a leaf.

The engraver of the coin, Kuzma Kovačić, is distinguished Croatian academic sculptor.

Difference between year with dot and without dot: