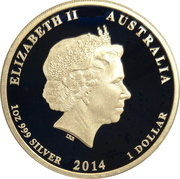 Design includes the dolphins and crown that feature in the Royal Australian Navy Submarine Service ship's badge, the inscription CENTENARY OF AUSTRALIAN SUBMARINES 1914-2014,and the Perth Mint's 'P' mintmark.

Continuous reeding with the inscribed words SILENT SERVICE appearing three time around the edge of the coin.

On 24 May 1914 the Royal Australian Navy took delivery of its first submarines in Sydney, the two British built E-class vessels HMAS AE1 and HMAS AE2 as part of a substantial upgrade of Australia's fledgling naval fleet.