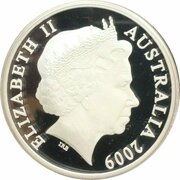 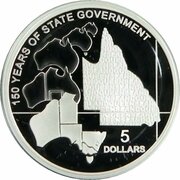 150 Years of State Government in Queensland

Small map of Australia and a large Map of Queensland

Released by the RAM is this Fine Silver (.999) Proof $5 coin to celebrate 150 Years of the Government of Queensland. Part of a series of six other similar coins, one for each State and Territory of Australia (Except for The ACT and Western Australia)

Bullion value: 30.11 USD Search tips
This value is given for information purpose only. It is based on a price of silver at 830 USD/kg. Numista does not buy or sell coins or metal.