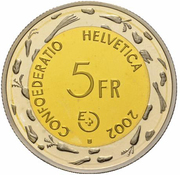 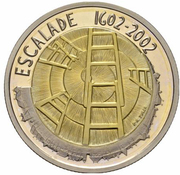 400th anniversary of the Escalade festival of Geneva

Vegetables on the outer ring.

Perspective view of siege ladders propped around a town wall, represented by houses depicted along the outer ring.

Fête de l'Escalade (from escalade, the act of climbing defensive walls), is an annual festival in Geneva, Switzerland, held each December in celebration of the defeat of an attempt to conquer the Protestant city by the Catholic Duchy of Savoy. Troops sent by Charles Emmanuel I, Duke of Savoy, attempted a surprise attack during the night of 11-12 December 1602, but according to legend, were repulsed by a cook who dumped boiling vegetable soup on the invaders before raising an alarm. The celebrations and other commemorative activities are usually held on 12 December or the closest weekend.