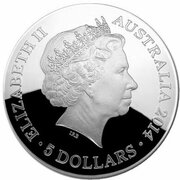 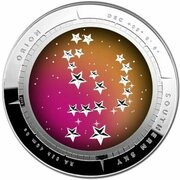 Depiction of the Constellation of Orion set within a compass

This is the second in a series of coins released by the RAM to celebrate the Southern Night Skies. Pad Printed on a curved planchet this coin depicts the constellation "Orion", also known as the Hunter.  It is a prominent constellation located on the celestial equator and visible throughout the world. It is one of the most conspicuous and recognizable constellations in the night sky.

Bullion value: 28.26 USD Search tips
This value is given for information purpose only. It is based on a price of silver at 910 USD/kg. Numista does not buy or sell coins or metal.