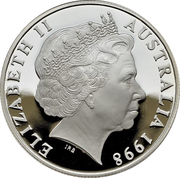 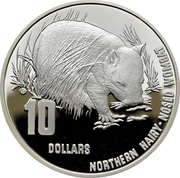 This coin is a piedfort version of KM#397.1 and is part of a series of four Sterling Silver (.925) Proof coins released by the RAM to highlight Australia's Endangered Species.

Once common throughout New South Wales, the Northern Hairy-nosed Wombat's Lasiorhinus krefftii  numbers began to decline after European settlement. Between the once strong demand for the soft brown pelt of the stocky animals, and the competition with domestic livestock for the native grasses that made up their diet, the Northern Hairy-nosed Wombat's population was reduced to a scattered collection of colonies, there are thought to be only 65 individual animals alive today

Bullion value: 30.03 USD Search tips
This value is given for information purpose only. It is based on a price of silver at 812 USD/kg. Numista does not buy or sell coins or metal.