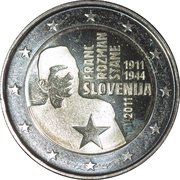 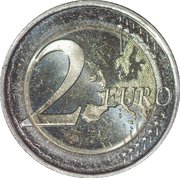 The design shows the effigy of Franc Rozman-Stane (1911 – 1944), a leading partisan and national hero of the national liberation struggle. The coin depicts on the left hand of its inner part his effigy with a star, his name, years of his birth and death, and "Slovenia 2011". The coin’s outer ring depicts the 12 stars of the European flag.